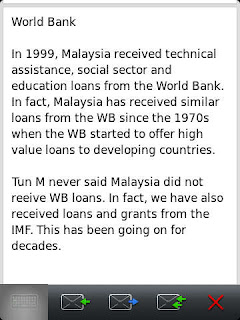 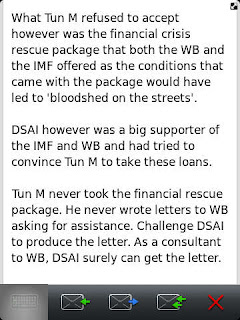 In 1999, Malaysia received technical assistance, social sector and education loans from the World Bank. In fact, Malaysia has received similar loans from the WB since the 1970s when the WB started to offer high value loans to developing countries.

Tun M never said Malaysia did not receive WB loans. In fact, we have also received loans and grants from the IMF. This has been going on for decades.

What Tun M refused to accept however was the financial crisis rescue package that both the WB and the IMF offered as the conditions that came with the package would have led to 'bloodshed on the streets'.

DSAI however was a big supporter of the IMF and WB and had tried to convince Tun M to take these loans.

Tun M never took the financial rescue package. He never wrote letters to WB asking for assistance. Challenge DSAI to produce the letter. As a consultant to WB, DSAI surely can get the letter.