This FIRST DOCUMENT is proof that the RM24 million diamond ring OWNED by New York-basedJacob & Co was brought into the country for a private exhibition by Jacob & Co's regional agent MALCA-AMIT. 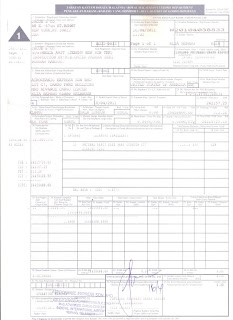 THIS is the much publicised RM24 million ( I repeat it is RINGGIT MALAYSIA 24 million as stated in the Royal Malaysian Customs declaration forms). 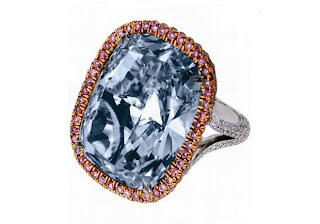 The Royal Malaysian Customs declaration form below is proof that the RM24 million diamond ring which was brought into our country for a private exhibition by its New York-based owners, Jacob & Co, was taken OUT of Malaysia on the 20th of April, 2011. - four days after arrival on the 16th of April, 2011.
Below is the proof - 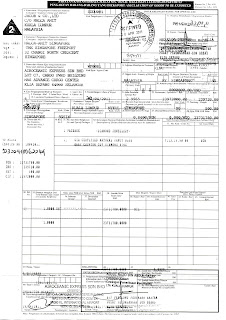 So its a fact that the much talked about ring was brought into the country.


It is also a fact that the regional agent for Jacob & Co did use Datin Seri Rosmah Mansor's name (it says 'inspection by') on the Customs declaration form.


It is a fact that such fine jewellery, as this diamond ringOWNED by Jacob & Co, IS NOT a taxable itemunder the Malaysian LAW.


It is also true that a private exhibition by Jacob & Co's regional agent did take place in a private residence of a VVIP in Kuala Lumpur sometime between the 17th - 19th of April, 2011.

It is NOT TRUE that the RM24 million ring owned by Jacob & Co was PURCHASED by any of the VVIPs who were present at the "private exhibition'.


The RING IS NOW WITH ITS RIGHTFUL OWNERS - JACOB & Co in New York - Thank You.


It is a BIG LIE that the Prime Minister's wife Datin Seri Rosmah Mansor had purchased the ring with her savings as being propagated by some politicians and their desperate lackeys.


These Opposition politicians are so desperate that they have even created a FAKE Utusan Malaysia front-page montage. 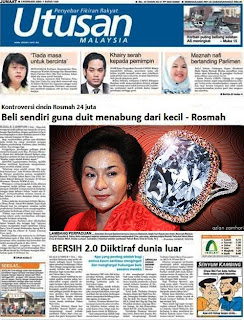 p/s This is not the first time such nasty 'super-imposed' pictures are used to discredit the Government and those associated with it. The last time PKR's now BATU Member of Parliament Tian Chua ADMITTEDsuperimposing Prime Minister Datuk Seri Najib Razak's picture as part of their dirty political campaign to discredit Najib.